10 years of surpassing oneself

This month, Tribu celebrates its 10th anniversary. While we can’t bring you together to celebrate, we look back each week on the most epic adventures through the eyes of those who have accompanied us: festival-goers, athletes, partners or team members.

Last week, we went back to the beginnings of Tribu, which is above all an adventure of passion.

We also recognize a Tribu experience by our tendency to bring people out of their comfort zone, to surpass themselves.

This week, we have selected 4 people who have experienced the acceleration of their heart rate with Tribu! Mathieu Chouinard, from trainee to competitor

Mathieu is well known within our team. The skater from Victoriaville did an internship at Tribu while he was at CEGEP and has been part of the family ever since.

In 2019, it was therefore natural to see Mathieu at JACKALOPE… but we didn’t expect to see him compete against TJ Rogers, Lucas Rabelo and the other world stars.

“In 2019, I was going there for fun as usual because it’s an opportunity to skate with pro skaters, we don’t get that chance every day, especially in Quebec. We may think we’re good, but when we compare ourselves to the world’s skaters, it’s something else.”

But this time, Mathieu skated so well in the preliminaries that he advanced to the quarter-finals of the competition. And he heard it from the legendary Dave Duncan… when all the skaters were gathered in a bar.

“Dave Duncan came up to me at the bar the night before the big competition to tell me that I had skated well and that I was going to be at the competition the next day, says Mathieu. I didn’t understand, I didn’t think I qualified… but Micah came up to me and said, stop drinking, water up!”

The next day, Mathieu showed up at the Olympic Stadium to compete with his youth idols.

“Being on the same course as TJ Rogers just showed me that we weren’t that far away,” he explains. ‘’Skateboarding is all about style, a different approach, that’s what’s cool. To skate with guys like JS Lapierre, who I’ve always watched in videos, and have him look at me and cheer me on… for once I felt like I was IN the scene.”

But for Mathieu, this meeting at the bar with Dave Duncan remains his most beautiful memory. 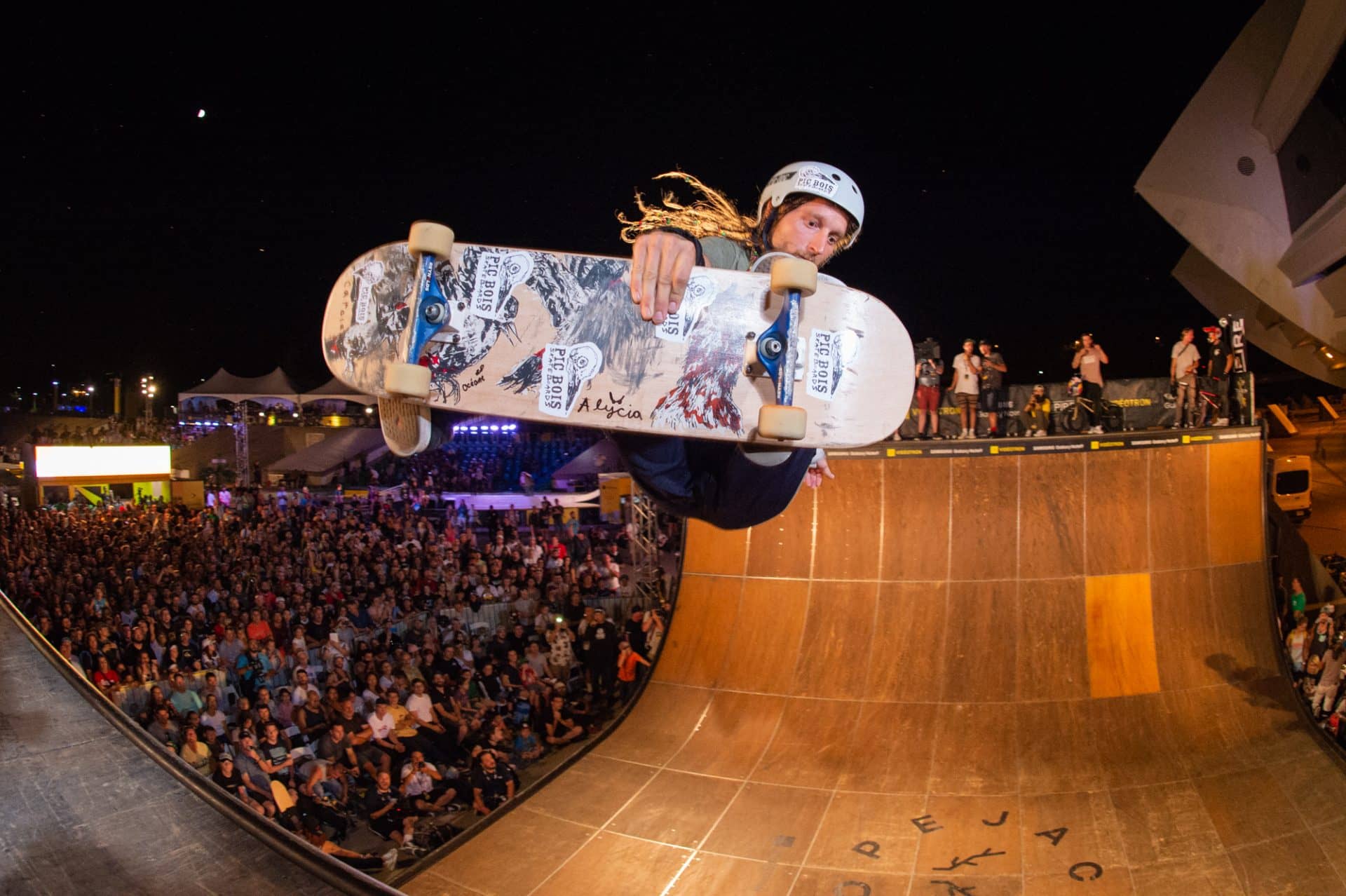 In 2017, Julien realized his youthful dream and he was not expecting it at all. He had participated in other editions of JACKALOPE as a street skater, but he had learned of Tony Hawk‘s arrival a few weeks before the event. For him, it was too good an opportunity to go back to vert (Skateboarding in a ramp).

“I stopped for 10 years, until JACKALOPE decided to bring vert back to Montreal in 2017,” he says.

When the 14-foot ramp was installed at the Olympic Stadium, Julien was ecstatic.

“I was so motivated that I think I was the first one who skated it! I sneaked into the Olympic Stadium area at night to try it out.”

At the time, Julien had no idea that he would have the chance to skate this mega-structure in broad daylight. A bit like Mathieu, it was during a drunken evening that his luck changed.

The day before the competition, we went to the bar and I met three athletes who were going to compete in the vert part the next day. I chatted with Elliot Sloan, who is an X Games gold medalist, and he said, “Why don’t you skate with us tomorrow?”. I looked at him and I said, “Well, skate with you, Tony Hawk and Andy MacDonald?! For real?”

Elliot wasn’t lying. The day after this drunken evening, the founder of Tribu, Micah Desforges went to tell Julien the good news. The rest is blurred in his memory.

“It was such an emotional day, I don’t even know what happened! In the evening I went to bed wondering if it really happened, if I had really skated in front of 10,000 people with this guy.”

But yes, Julien Gagnon did skate with Tony Hawk, Elliot Sloan and Andy MacDonald. Not bad for a guy who hadn’t skated a vert in a decade.

In 2018, Julien was able to repeat the experience and enjoy it fully. We produced this video in association with Videotron to follow Julien’s path. Shantal and the snowmobiles

Tribu has been offering adrenaline at will for several years now at the Olympic Stadium, both in summer and winter. In fact, the Barbegazi 2016 event opened the door to a major project a few months later.

“I went to the Barbegazi festival at the Olympic Stadium in the winter of 2016 and I had just picked up the project for the 375th,” says Shantal Bourdelais, executive producer for the festivities surrounding Montréal’s 375th anniversary. When I saw the snowmobile demonstrations outside the Olympic Stadium, I got a big shot of adrenaline and I immediately asked Micah if he was able to present a project like this in the heart of downtown Montreal.”

As soon as the winter festival ended, the Tribu team set to work on this special request.

“Micah did his homework and showed me what the X-Games was all about. I really liked the idea, so I presented it to the 375th Board of Directors and everyone got on board!”

But the constraints were numerous since the organization had to ensure the safety of all. But Shantal and Micah pushed the limits to make the project happen.

“We studied several sites at the beginning, but given the constraints of street closures, we stopped at Square Phillips,” explains Shantal. It was a crazy adventure, but it was really extraordinary. We didn’t have a lot of time for assembly, Micah had to find a supplier to bring a lot of snow into the downtown area, we had to secure the take-off and landing platforms and have engineers check everything.”

But it was worth it and the result lived up to the expectations of the 375th team.

“We all had the eyes of a 5-year-old when we saw the result. I think that in the field of events, this was one of the most beautiful, one of the craziest events of my life.”

Pascale, Ubisoft and the Six Invitational

Since 2017, Tribu has been mandated by Ubisoft for its Six Invitational event, featuring the best players of Rainbow Six Siege. This is the largest Esport event in Canada. And it keeps growing. Nothing our producer Pascale Beauregard can’t handle.

“Tribu has to deliver the on-site experience for our participants and this is a very big challenge,” explains Laure Guilbert, marketing product manager at Ubisoft. ‘’But we also always have to think about those who are at home and watching us. We have to deliver a high quality experience to those who are there and make people from all over the world who are watching from a distance want to come to the event the following year.”

In the world of Esport, error is unacceptable and Pascale must make sure not to miss anything. But above all, the product must be better year after year.

“There has been a rather incredible evolution from 2017 to last year. Every year, we make sure we make the event bigger, better and of higher quality,” explains Laure. For a game like Rainbow Six Siege, it’s important to stand out and work with a partner like Tribu, because they understand that reality. They understand that we have to do things differently.”

But no matter the pressure or the size of the event, our Pascale keeps her cool.

“Pascale is a mountain, says Laure. Her expertise, but also her professionalism, her method of attacking projects, is always exemplary.  For someone like me who manages a big event, I’ve had moments when the stress was so high… but I’ve never seen someone as calm as Pascale in the storm. She’s incredible.”

We can confirm it to you, Pascale is still very calm despite the current storm… but she is especially very eager to return to play on the field.

Next week, we’ll tell you the stories of some of the people who have achieved their wildest dreams at our events.

10 years of events inspired by passion