10 years of events inspired by passion

This month, Tribu celebrates its 10th anniversary. While we can’t bring you all together to celebrate, we’ll look back each week on the most epic adventures through the eyes of those who have accompanied us: festival-goers, athletes, partners and team members.

Tribu, it is above all a story of gatherings inspired by passion.

What do the JACKALOPE Festival, the Rainbow Six Invitational and Mud Rocker have in common? They brought people with a common passion together… and that’s exactly how Tribu was born.

Crazy people and a backyard

The story begins with a bunch of passionate people…

No one could have predicted that a backyard party in Montreal’s Rosemont district would lead to such an intense adventure.

”It started as a delirium of passionate young people and grew from there” says Micah Desforges, founder of Tribu Expérientiel. In my apartment on Masson Street where we were in 2009, we were constantly having theme parties. And at one point, we decided to do a snowboard backyard contest with zamboni snow, a concept that hadn’t really been seen in Montreal.”

Dozens of snowboard enthusiasts then found themselves in the backyard of Micah and his roommates.

“I had managed to find sponsors, the yard was packed and the neighbors were having their little glass of red wine while watching it, recalls Micah. It was crazy, people couldn’t believe it. Then the next morning, when there were so many people lying around the apartment, a friend of mine at the time challenged me to make it even bigger next time…”

MUD ROCKER as told by Marc-Antoine

If winter sports were a trigger, Tribu has never been afraid to venture into other action sports.

In 2014 and 2015, the Mud Rocker Mountain Bike and BMX competition was born and brought together more than ten thousand enthusiasts. Athletes were then invited to launch themselves on large modules installed directly on Saint-Laurent Boulevard. For the occasion, our team had to bring tons of dirt in the heart of downtown.

Among the attendees was Marc-Antoine Lalonde, a ski and BMX enthusiast. At the age of 18, he had been invited by one of his sponsored friends who was participating in the competition.

“I kind of signed up at the last minute on a whim because I didn’t really think I had a place, I wasn’t really at the same level as the pros.”

Inspired by adrenaline, Marc-Antoine managed some 360 degrees with his BMX before really deciding to push his own limits.

“It was really a whim. I was looking at the other participants around me, they were all my age and they all looked normal like me. They were all doing crazy tricks and I figured the backflip had been on my list for a long time… so if there was a time to do it, it was there!”

Mission accomplished, it is at Mud Rocker that Marc-Antoine made his very first backflip!

“I was lucky I signed up, it was such a great experience, it was sick!”

SIX INVITATIONAL as told by Alec

Take our word for it, adrenaline is also very present in Esports events.

Since 2017, Ubisoft has been relying on Tribu to organize the SIX INVITATIONAL, an Esports event that brings together the biggest fans of the Rainbow 6 Siege game in Montreal.

“I started playing Rainbow 6 when the game was released and I saw the pro scene growing,” said Alec Laberge. I couldn’t go to the first SIX INVITATIONAL because I was in school, but I had watched it all online without my teacher knowing, and I thought I should definitely go the next year.”

In 2018, festival-goer Alec Laberge was there to cheer on his favorite team, the Evil Geniuses. A true fan of Rainbow 6 and Esports in general, Alec had his very first live Esport experience at the SIX INVITATIONAL.

“For me, Esports events are very important to show the world how popular video games are and that the passion is shared by many people.”

And Alec is now a well-known character at Esports events, as he never goes unnoticed when he cheers on his favorite players!

“When I go to events, I like to let off steam, I like to cheer and be vocal! That’s where the Crazy EG fan came from!”

The Amnesia and Empire stores were among the first partners to give Tribu a boost. The company was then able to count on the invaluable support of giants such as Red Bull, Harley-Davidson, Pabst Blue Ribbon, Yeti, and Videotron.

The telecommunications giant has jumped on board in the JACKALOPE adventure, an action sports festival featuring skateboarding, climbing, biking, base jumping and more.

“What caught our attention was Micah’s dream and the way he promoted action sports,” said Catherine Soulié, Director of Strategic Alliances at Videotron. ‘’His goal was to democratize action sports and the DNA of what he wanted to do with his event resonated. The target audience was also an audience we weren’t talking to. We had to talk to young people for our mobility product… so all the elements were there.”

Videotron has helped JACKALOPE grow rapidly over the past four years, including bringing in legendary Tony Hawk. 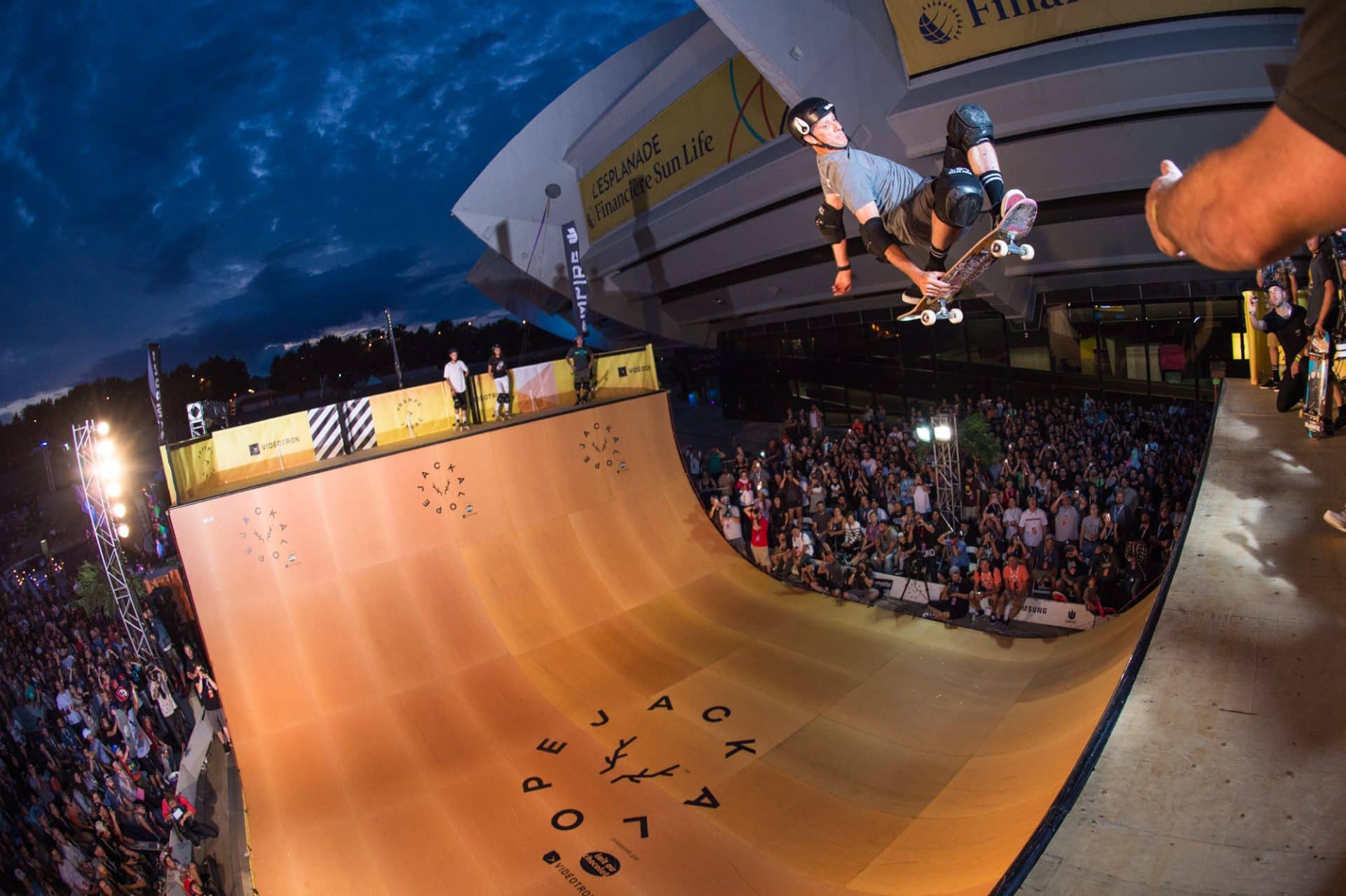 “During negotiations, I felt there was a little something missing, so I asked Micah what his dream was. He told me his dream was to bring Tony Hawk in.”

Catherine and Videotron helped the team make this dream come true. Thanks to a partnership between Samsung and Videotron, the skateboarding legend showed up for the first time at JACKALOPE in 2017, attracting nearly 10,000 spectators to the Olympic Stadium.

But who would have thought that a backyard party would lead to such great adventures?

Whether it is our festival-goers, our partners, our team or our athletes, Tribu is also 10 years of experience in which we push the limits to surpass ourselves. Next week, we’ll look back on the biggest challenges we’ve had to go through through 4 new testimonials!

To not miss anything, subscribe to our newsletter right here.

How a guy seduced the whole world with a skateboarding video